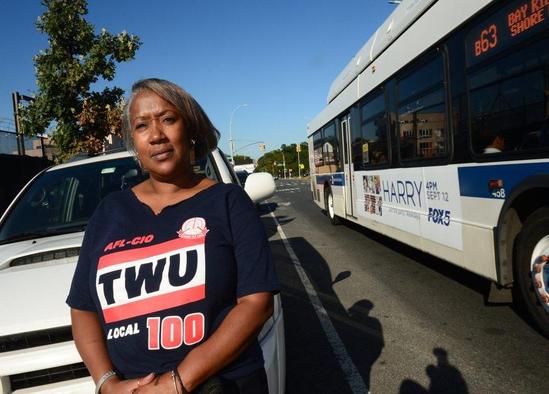 Phinn once had to kick everyone off her bus after a woman threatened her life. (TODD MAISEL/NEW YORK DAILY NEWS)

Kelvin Burton, a bus driver for more than two decades, had a rough start to 2015 thanks to a brazen farebeater.

On New Year’s Day around 9 a.m. that year in Flatbush, the rider on the B8 bus got irked that Burton confronted him over the stiffed fare and began to rant about having a gun.

Burton, 46, of Harlem, who has a burly build, took it as blustery tough talk. But he still called police and reported the incident to the Metropolitan Transportation Authority.

“It was a threat, to be honest with you, so I had to call the police, of course,” said Burton, who said the man hopped off after cops were called.

“It was a big scene on the bus, from just asking him for his fare, which I thought was crazy, ludicrous,” Burton said.

Burton’s complaint was one of the 1,466 reports of threats and harassment in 2015.

So far this year, there have been 932 threat and harassment complaints — in addition to 34 reported assaults.

Drivers and union officials said an untold number of incidents never get reported. And it has become such a concern that bus operators are told to let farebeaters board to avoid confrontations that can turn violent.

At the Jackie Gleason Bus Depot in Sunset Park, Brooklyn, one of the biggest depots in the MTA, bus drivers said it’s routine to hear a few four-letter words from passengers during their shifts.

“Even being called a b—h has become like second nature now.”

She recalled an especially disturbing incident in December 2008 when she reprimanded some teenagers who pushed their way onto her B35 bus. A woman told her to leave the kids alone, then brought up the recent death of Brooklyn bus driver Edwin Thomas, who was stabbed by a farebeater.

“You gonna get the same thing if you keep arguing with these kids,” Phinn recalled the woman telling her.

“It just rocked me and the only thing that I could do was to take it personal, which means that I had to discharge my whole bus because I needed to get out of that situation,” Phinn said.

The number of complaints from the roughly 11,000 bus drivers in the city have risen each year since 2012, when there were 1,083 reports.

The rise in complaints is because more cases of verbal abuse are being reported — even as spitting incidents and assaults went down by a third between 2011 and 2015.

By the end of this year, the city’s entire fleet of buses will have plastic partitions, according to MTA spokesman Kevin Ortiz.

“Regardless of how they’re categorized, these repugnant actions such as assaulting, shoving or spitting on bus operators will not be tolerated,” Ortiz said in a statement.