On July 9th, 2019, RTO Executive Board member, Evangeline Byars released an Executive Board report with an update regarding the status of our current contract’s negotiation.

Within the 29 minute clip floating around the Facebook social media platform, Ms. Byars revealed that the Local President, Anthony Utano did not in fact demand a particular percentage in wage increases but instead demanded that the wage increases be “fair”. It was later reported that President Utano stated that our contracts are to follow the pattern set forth by DC37.

Utilizing this ideology of patterned bargaining would mean that President Utano’s idea of a “fair” wage increase would be a contract riddled with pathetic 2% wage increases, which is exactly what the MTA has budgeted for. In 2018, DC37 struck a “deal”, a 44 month contract with the City of New York with wage increases totaling 7.42%. With a contract term of 44 months, this wage increase averages out to 2% per year and 1.42% for the remaining 8 months of the contract term. Insisting that our Local resort to a patterned bargaining strategy will ensure that our wages do not surpass the cost of living.

Are we really only entitled to receive the same wage increases as DC37?

The answer is no. In fact, before 2012, our wages have exceeded the raises DC37 employees received.

In 2009, Arbitrator John E. Zucotti, the Chairman who settled the 2009 contract negotiations impasse wrote in his decision:

Zucotti’s decision paints a clear picture, the pattern set forth by DC37 is not binding. Furthermore, DC37’s weak bargaining efforts should not set the bar for the wage increases we Transit Workers truly deserve.

It is evident that President Utano’s definition of “fair” wage increases resorts to what is fair and will meet the expectations of the MTA’s budget, not of what the rank and file members of TWU truly deserve. 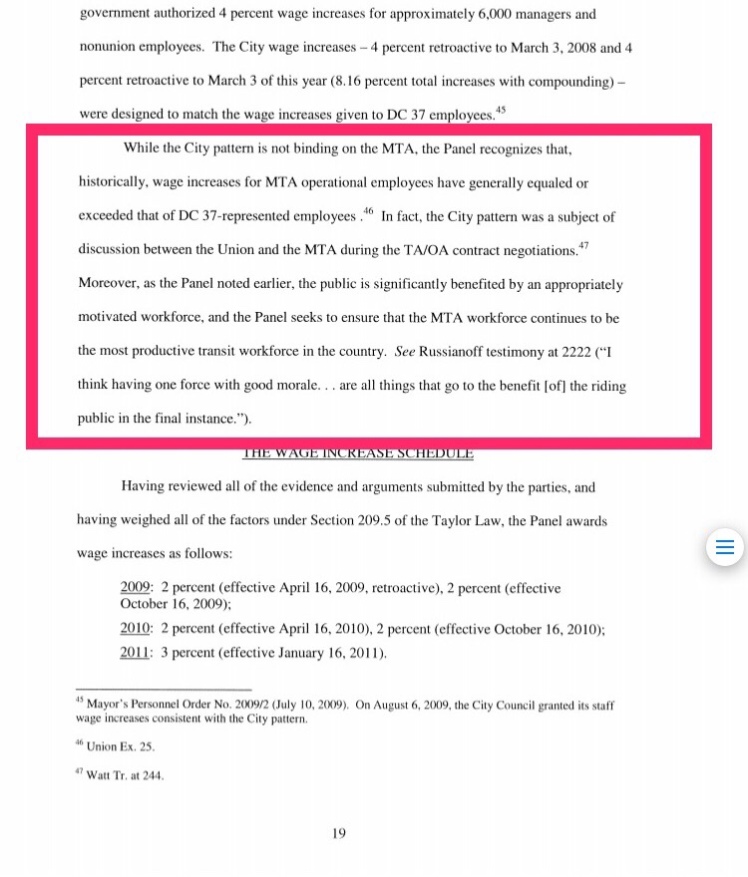