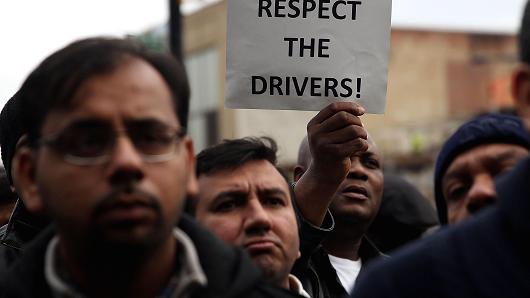 Uber has struck a five-year labor agreement with the New York arm of the International Association of Machinists and Aerospace Workers that allows the union to represent the company’s more than 35,000 drivers in the city.

Under the agreement, the IAM has developed a separate affiliate group called the Independent Drivers Guild (the operative word being independent) through which drivers can meet with Uber’s management on a regular basis and appeal deactivations.

Uber’s agreement with IAM is practically a carbon copy of the terms of a settlement the company agreed to forge in order to put a pair of misclassification lawsuits to rest in California and Massachusetts. Under that agreement, the company agreed to facilitate the creation of a driver association that would meet with Uber regularly, along with a deactivation-appeals panel, so long as Uber was allowed to continue to treat drivers as independent contractors.

But the driver associations created through both the IAM agreement and the settlement agreement stop just short of being a union in that drivers can’t collectively bargain for changes in fares.

“Drivers will also gain access to discounted legal services, life and supplemental disability insurance, education courses and roadside assistance, along with an online worker center, providing a central hub for driver assistance and resources,” IAM wrote in a statement.

The agreement benefits Uber for a number of reasons. For one, it’s a public relations coup in many ways, primarily because it shows the company is at least willing to have conversations with drivers about their treatment. It will also help the company attract and retain drivers. Lyft, Uber’s biggest U.S. competitor, doesn’t have a system like this set up.

Additionally, the IAM is working with Uber at the state level to push for equal sales tax rates for taxis, black cars and livery cars. As it stands, Uber riders pay a tax that is a percentage of the fare while taxi riders pay a flat $.50 tax.

According to the announcement, a standard sales tax rate will allow Uber to give its riders more money and “free up resources for a new benefits fund administered by the Guild in consultation with drivers, which could include paid time off, a legal defense fund, a disability fund, retirement savings accounts or an immigration assistance fund.”

As part of the announcement, Uber also announced it was working with the Freelancers Union to help the company bring so-called “portable” benefits to its on-demand workers.